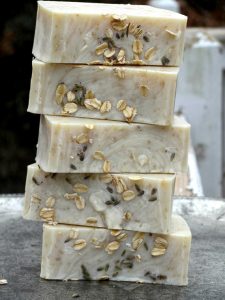 100% Natural Lavender & Oatmeal Soap
Ready to pamper yourself? Let the comforting scent of lavender soothe your spirits while fresh ground oats and natural oils moisturize your skin. The therapeutic scent of lavender is the focal point of this handcrafted soap, though it also contains coconut oil for extra hydration and grape seed oil for vitamin E. The bar itself has been blended with colloidal oatmeal, a time tested remedy for damaged and distressed skin, and the addition of whole ground oats provides gentle exfoliation that won’t scratch your skin. This luxurious soap is handmade with all natural ingredients. You will find no harsh chemicals in our artisan soaps. Each bar is 5 oz. 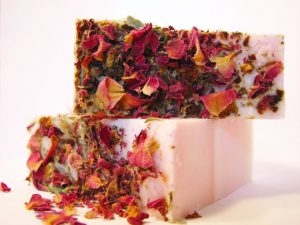 100% Natural Rose & Coconut Milk Soap
There’s nothing more romantic than roses. It’s time to love yourself and gift your skin with this nourishing blend of rose and coconut milk. This bar is quite soft and has a creamy texture which is enhanced by a decadent rose scent. Dried, crushed rose petals adorn the outside of the bar for additional fragrance as well as gentle exfoliation. Our secret is a touch of jasmine, which adds an extra bit of spice to the bar’s scent. You won’t regret indulging yourself with our 100% all natural organic soap. Each bar is 5 oz.

Pick Branson for your next family vacation

Looking for affordable family fun this summer vacation? Whether you’re looking for wholesome entertainment, scenic natural beauty, or exciting theme parks, Branson has something for all ages to enjoy.

Located in Southwest Missouri, Branson boasts over a dozen theaters and nightly shows in every genre imaginable. From music to comedy to classical theater, you’ll find a show to suit your tastes on Branson’s famous entertainment strip. While Branson is famous for its long association with country music, there’s enough variety in shows to keep both cowboys and city slickers entertained!

Due to its location in the heart of the Ozark Mountains, Branson is filled with natural beauty. From lakes to natural forests to caves, Branson’s many parks and guided tours through the wilderness are fun for the whole family. Whether you want to spend a day fishing at Table Rock Lake, or go on a tour through the awe-inspiring Talking Rocks Cavern, you’ll leave Branson with a new appreciation for Missouri’s natural beauty.

Branson is also known for its action-packed theme parks. There are a variety to pick from, showcasing everything from roller coasters to ziplines, but the most famous is Silver Dollar City. This western-themed park takes you right back into olden times, with delicious food, street performers, craft shows, train rides, and more. On top of the themed flavor, Silver Dollar City also boasts a number of roller coasters and white water rafting for more adventurous visitors.

As if all those amazing attractions weren’t enough, Branson also has a number of museums, ranging from the educational to the entertaining. You can stroll through the painstakingly recreated Titanic Museum or pose with movie characters in the Hollywood Wax Museum.

Sprinkle on plenty of western and music-themed giftshops, a tiger sanctuary, horseback rides, go-karts, a zoo, and the Butterfly Palace, and there’s more attractions than you’ll know what to do with. You won’t regret choosing Branson for your next family vacation.

1. Be upbeat. Do not make any bad comments about a previous employer, a previous manager, or previous co-workers. Even if you are in, or have left, an unpleasant work environment, do not share that information with a new company during a job interview. Instead, focus on good aspects of your own job performance and your personal strengths, rather than making negative statements about other people or employers.

2. Relax. People interviewing you are actually just ordinary people with strengths and weaknesses of their own – and no one conducting an interviewing is looking for a perfect being to hire. (There aren’t any!)

3. Be friendly. If you have been called in for an interview, then you already know your application or resume was reviewed and found to have the type of background or experience the employer is looking for. That means the in-person interview is your chance to connect on a personal level with the hiring manager or hiring committee. So if you simply act sincerely friendly, that may be enough to set you apart from the competition.

5. Practice can’t hurt. Once you have an interview scheduled, go through with it even if you decide you do not want the job. Why would anyone do this? Being put on the spot and asked questions in a real job interview is the best practice possible for when you finally interview for a job you desperately would love to have! And after several interviews you will hopefully feel more comfortable talking about yourself and explaining to a prospective employer just how much you really have to offer.

Get past procrastination by tricking your brain

Procrastination has been preventing people from being productive since the first humans were roaming around in caves. You’re probably only reading this article because you’re putting off doing something right now! The good news is you can trick your brain into helping you move past procrastination with a few simple tips.

First, it’s important to understand what procrastination really is.

In the most basic terms, procrastination is basically a malfunction of the brain. When you know you have an important task to do that isn’t particularly enjoyable, such as making an important phone call or writing a school paper, your dislike of the task gives you low levels of anxiety.

This anxiety triggers a fight or flight reflex in your brain. Instead of just getting the unpleasant task done and over with, you instead make up reasons why it’s okay to put it off (the fight reflex) or simply avoid thinking about it (thanks to the flight reflex). The problem is, delaying the task only gives you more anxiety in the end. It becomes a bigger and bigger issue, and the bigger it is, the harder it is to force yourself to get it done.

So, how can you move past something that’s hardwired into your brain?

Simple: You trick your brain.

Create a reward for yourself when you get your task finished.

The reward can be as small as thinking “I can only get a cup of coffee after I make this phone call” or as big as “I can only buy this game I want after I finish my paper.” Make getting a reward an absolute fact in your mind, think about how much you really want that reward, and push through.

Make a list and break your task down into tiny steps.

Part of what makes things we don’t want to do feel so overwhelming is they seem impossibly huge!

But it doesn’t have to be that way. By making a list and breaking your task up into tiny steps, it makes it seem more doable. Even if you’re putting off something as small as an unpleasant phone call, it seriously helps if you make some notes. “1. Pick up the phone, 2. Dial number, 3. Explain why you are calling, 4. Have notes prepared…”

And, if you make a list for a bigger task, it makes it even easier to…

Start in the middle of your task whenever possible.

It can feel overwhelming to start at the beginning and do the task “properly”, but what really matters is that you start accomplishing something. If you have a paper to write, think of the easiest part to write and just start in the middle someplace. If you need to clean your house, pick the easiest part to tidy.

Give your brain a break by allowing yourself to procrastinate in a controlled manner.

Trying to absolutely force yourself to complete a task all at once can be disastrous. If you can’t focus and are absolutely miserable, give yourself five minutes to do something fun. Get up and stretch and get a drink, or pet your dog, or browse the internet–but make your break only five minutes long. Once your break is over, get back to the job you really need to get done.

You can even try working for five minutes, then taking a break for five minutes, so on and so forth. It might be slow going, but at least you’ll be chipping away. And usually once you gain some momentum in working on your task, it becomes easier to focus on.

Hopefully you see how you absolutely can beat procrastination. Sometimes it really is as simple as tricking yourself into productivity. Now close this article and chip away at your task! You’ll feel so much better afterwards.

Now that the days are heating up, it’s important to remember how to stay cool!

Heat exhaustion is a very serious medical condition that is easier to get than you may think. Left untreated, it can lead to heat stroke, which can be deadly.

The most important thing you can do to avoid heat exhaustion is to drink water.

Always take a bottle of water with you and drink frequently when you’re sweating.

Stay in the shade when possible.

If you absolutely must be out in the sun, rest and drink frequently.

Wear cool clothing that is loose and light colored.

Bulky clothing can overheat you very quickly, and dark colors draw more heat in the sun.

Most importantly, listen to your body!

The first signs of heat exhaustion are dizziness, fatigue, and nausea. You will also probably get a pounding headache and racing pulse. If you feel any of these symptoms, get to a cool place and rest immediately.

Anyone can get heat exhaustion, but it is most common in children and seniors, individuals who are obese, and those taking certain drugs and medications. Heat exhaustion is also most common when it’s very humid.

So, it always pays off to keep an eye on the heat index and take extra precautions any time you work in the heat.